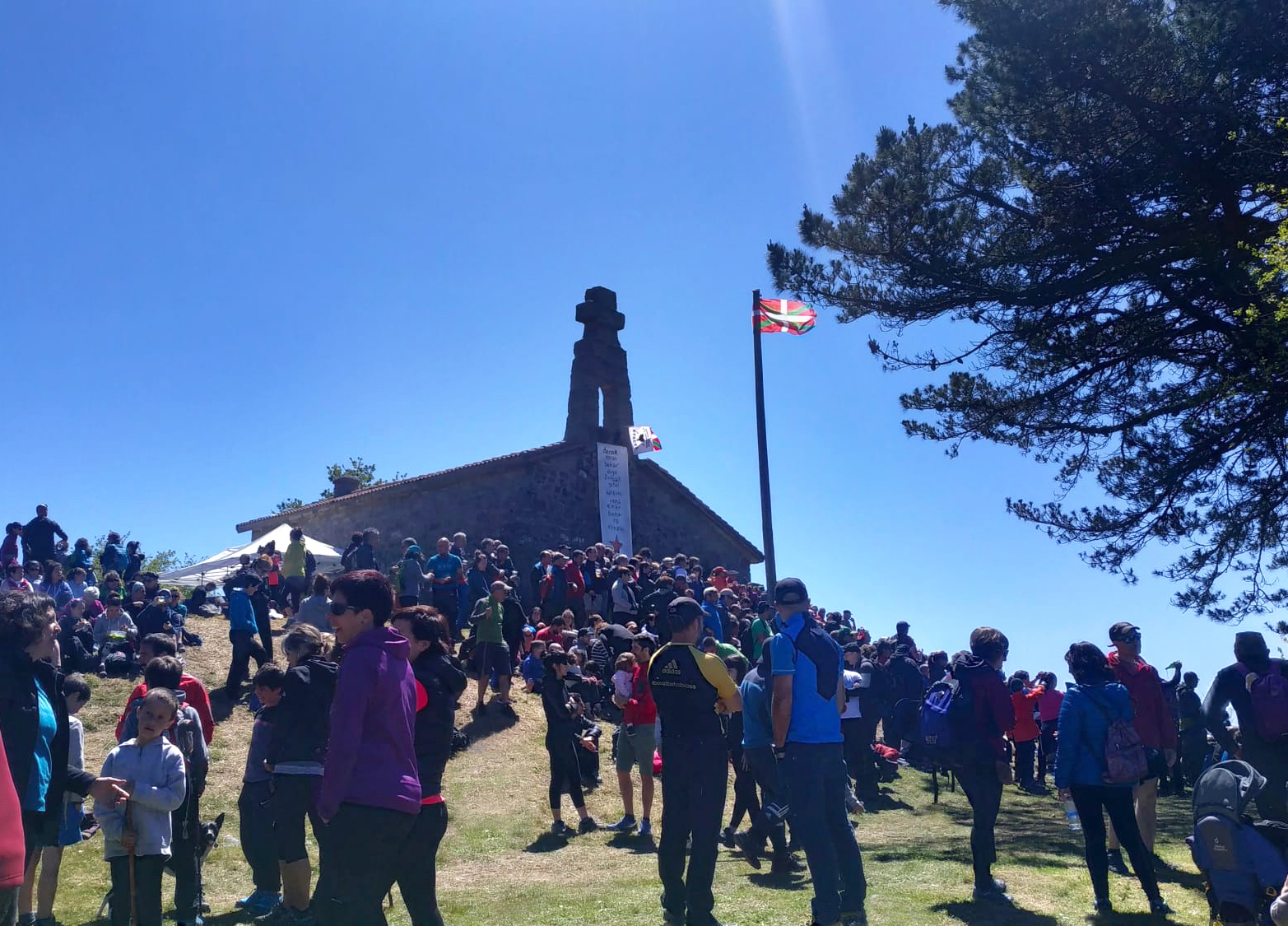 Along with traditional weekend dancing, celebrations held at hermitages were hugely popular in times gone by. Such occasions were for the vast majority a great escape from daily routine, a longed-for chance to move away from everyday life, and of course, a once-in-the-year opportunity to meet with friends from the surrounding villages which you would hardly see otherwise.

Pilgrimages to the countless hermitages and sanctuaries in the Basque Country were common. Some might have been minor, but others enjoyed great renown, the ascent to the Holy Cross of Bizkargi every 3 May being one of the most multitudinous in Bizkaia.

Pilgrims from Etxano, Gorozika, Morga, Muxika and Larrabetzu would until the 1970s climb Bizkargi Mountain saying worship prayers and litanies. Incidentally, and as tradition holds, the maize fields were sown on that same day. All farm chores having been duly finished, folks were ready to head for Bizkargi.

Men, women and children alike flocked there. Led by the priest, a multitude of local farmers joined the procession during the ascent. They would take a break and a breath half way up, and tickets were distributed for a sip of wine once reached the summit. The said wine was served in individual glass containers pilgrims took from home.

After mass the priest came out of the hermitage, and standing in front of the sacristy, gave a blessing, followed by a sprinkling of holy water. Homemade laurel crosses for the stable, the fields and the house doors were also blessed on the day.

The following Sunday to the festivity of the Holy Cross used to be a great day of celebration, attracting people from surrounding villages and further off (Bedia, Galdakao, Bilbao, Etxebarri, Busturia, Orozko…); hordes of them arrived by train in Lezama, and from there they walked up through the woods. Picnics abounded: salt fish, wrapped in cabbage leaves and packed in a shoe box, was a favourite for lunch; and potato omelette proved another beloved choice. They would sit on the fields around the hermitage or under the trees to eat. Food and drink stalls and awnings were set up, and the wafer seller from Bilbao was a usual sight among attendees.

Music and dancing were enjoyed after lunch. Two or three players would perform, boys having to pay a cent for a dance. Girls danced with each other, while lads took advantage to choose their prospect partners to later ask them to dance.

Feasting continued in the afternoon at Goikogane mountaintop in Morga. Indeed, instead of climbing to Bizkargi, many folks stayed at Goikogane dancing their time away. At nightfall they returned to their houses singing and happily recalling the day.

The festival of the Holy Cross of Bizkargi was certainly a special day in the annual calendar, and although customs and beliefs have changed considerably, it still retains some of its relevance. How very sad that this time round the feast shall not be celebrated as usual.

Power and protection of a badger’s foot