Neither txakoli wine or cider: it is pitiki 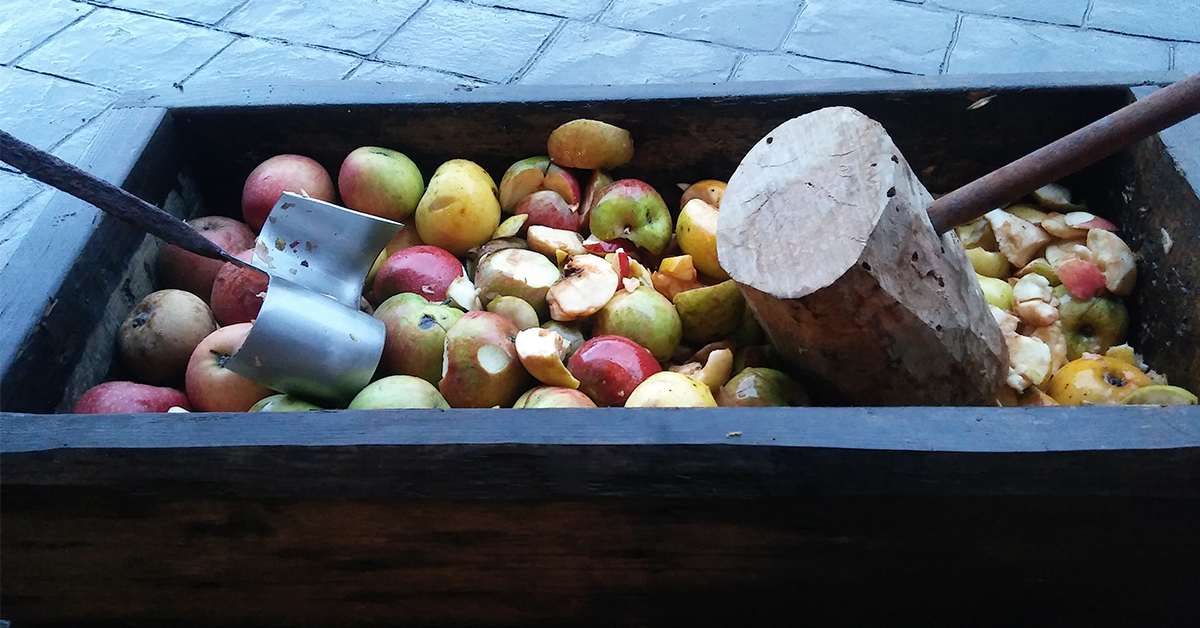 Life at the traditional farmstead revolved around what the land needed and provided at each time of the year. And autumn is apple season. Time to harvest the fruit. Each year is different and yields are better in some than others. This has been one of them. We now have to work out what to with such a glut of apples. So, we make apple compote, eat them fresh from the tree or even share them out among our friends, so the apples do not rot.

In the past, cider was made on most farmsteads and where cider was produced, pitikin or ciderkin was usually made as well. Alejandro Olabarria, from the Udiaga neighbourhood of Orozko, still makes ciderkin. That is what he had already seen at home and what he continues to do year after year. One of his uncles, it seems, used to make cider, but that was before Alejandro’s time. He remembers that there was a time when apples used to be sold to a wholesaler from Basauri. The apples were taken down to the town in a cart pulled by oxen and were then transported by car to Basauri. He also remembers apples being sold to private customers at a flat rate per apple and they had to pick them.

In bygone days, the best apples were used to make cider and the smallest and ugliest, the windfalls, for pitikin: —precisely one of the meanings of the suffix –kin is ‘waste’—.

In Orozko and in the neighbouring towns, in Zeberio, for example, this drink is called pitikina; and pitipina or pitarra elsewhere; in Abadiño, ur-sagardaoa; in Iparralde (the Northern Basque Country located in France), minata.

Ciderkin, according to Alejandro, is a poor-quality cider. However, he also said that it is a tasty and refreshing drink and is also very low in alcohol. He also told us that was why women and children used to drink it. In some place, it was also served to wash down chestnuts, as they were in season at the same time.

It was made by mixing in a wooden vat known as sagar-aska different types of applies urtebetea ‘apple of the year’, reineta, sagar gorria ‘red apple’ and geza ‘insipid’. The original vat was an oak trunk between one and two metres long and hollowed out using an adze, opatxurra. The one that Alejandro uses today is homemade, as is the whole ciderkin process.

The apples are cut up in the vat using a handle with a S-shaped iron tip, exa, and are mashed with a wooden club, mailua. Once mashed, the apples are placed in a barrel. It is filled up to just over halfway with apple and then water is added nearly to the top. The barrel is covered, though it does not need to be completely, and left to rest for eight or ten days. The ciderkin is then strained and bottled. Only plastic bottles are now used, because they close better and are safer. Glass bottles were used traditionally with the cork tied on with bale twine. Even so, many popped. It could also be drunk straight from the barrel. A little sugar is usually added to the bottle to sweeten the drink and thus liven up the taste.

According to Alejandro, there is a Spanish saying that goes: “This wine is worse than the pitiki”. Whatever they might say, some of us still enjoy a pitikin or ciderkin to wash down some nibbles as we chat with friends.