Within the shepherding culture, within its ethnography, and especially within the craftsmanship surrounding a shepherd’s occupation, there are pieces and devices which need no introduction; quite the opposite applies to others, though, not so much because we do not know them, but because we often do not know their name. Among the latter are bell collars, so-called canablas, and also known as cañablas.

We are referring to collars which sheep, goats, cows and horses wear around their neck, and from where bells are hung so that herds can be heard, identified and located. These are pieces which tend to go unnoticed, very much unlike the truly striking and noticeable bells dangling from them. Here, in these lines, we shall focus on livestock collars made of wood by shepherds themselves, being now gradually pushed into the background by leather straps, and likely to disappear in the short or medium term.

Ethnographic museums, as well as some private collections, still show singular collars, wider than everyday collars, designed to carry bells —cencerros or esquilas— of a certain size, with drawings and decorative inscriptions made using artisanal techniques of pyrography, and even in polychrome, showing initials, geometric drawings, or rustic drawings which might seem more likely to have been carved on the walls of a cave by prehistoric folks. 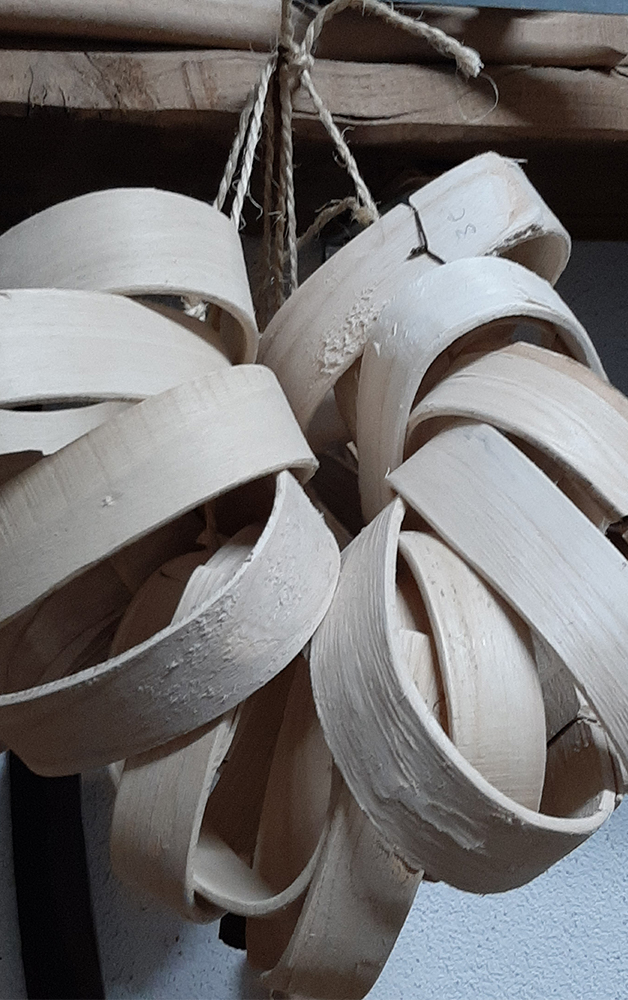 However, behind each collar hides a finer skill and greater artistry that we would ever suspect. A shepherd —and inevitably, I think of my father, a shepherd from Roncal (Nafarroa), whose experts hands must have crafted hundreds of these pieces— knows which wood is suitable for this type of handiwork; he also knows the right time of the year to harvest the wood, normally during the last full moon; he knows how to make splits, usually from chestnut or beech, and how to work strips down to their ideal thickness, not a millimetre more, not a millimetre less; he knows the wood should have been buried for some months in straw, mixed with manure if possible, for splits not to break when bending them; and moreover, he knows how to arm himself with enough patience to slowly but surely, and after immersion in water or manure, curve each wooden strip, using the contour of the leg as a mould, until it bends as much as needed.

With the help of a knife or an old piece of glass, the collar is given a well-rounded finish all around in order that the animal would not be hurt. Last but not least, two pairs of notches or incisions —named releches— are made with a penknife or any other sharp knife in the ends of the strip, allowing the collar to be securely fastened to the neck of the animal with some wire, always taking special care that knots remain on the outside, so as not to cause pain or distress to the animal who wears it.

Much larger and heavier bells ask for especially designed wider collars and a different, more agile system to put them on and take them off. Let us not forget that young male goats and castrated male goats—locally known as chotos and iraskos (from Basque iraskoak), respectively— who lead the herd during transhumant displacements take permanent turns to carry such weighty bells, thus requiring an easy system to fasten and unfasten their collars: namely, fasteners —tornilleras— carved in boxwood. Some of these are true works of art, preserved and found here and there, adding elegance and distinction to the whole set formed by bell, collar and fastener. Collar pins and fasteners, nevertheless, do require and deserve a separate post.

Indelible memories of handcrafted bell collars, discreetly going down in history and into the dusty trunk of oblivion, have accompanied us on this occasion.