The thief hanged by a pig 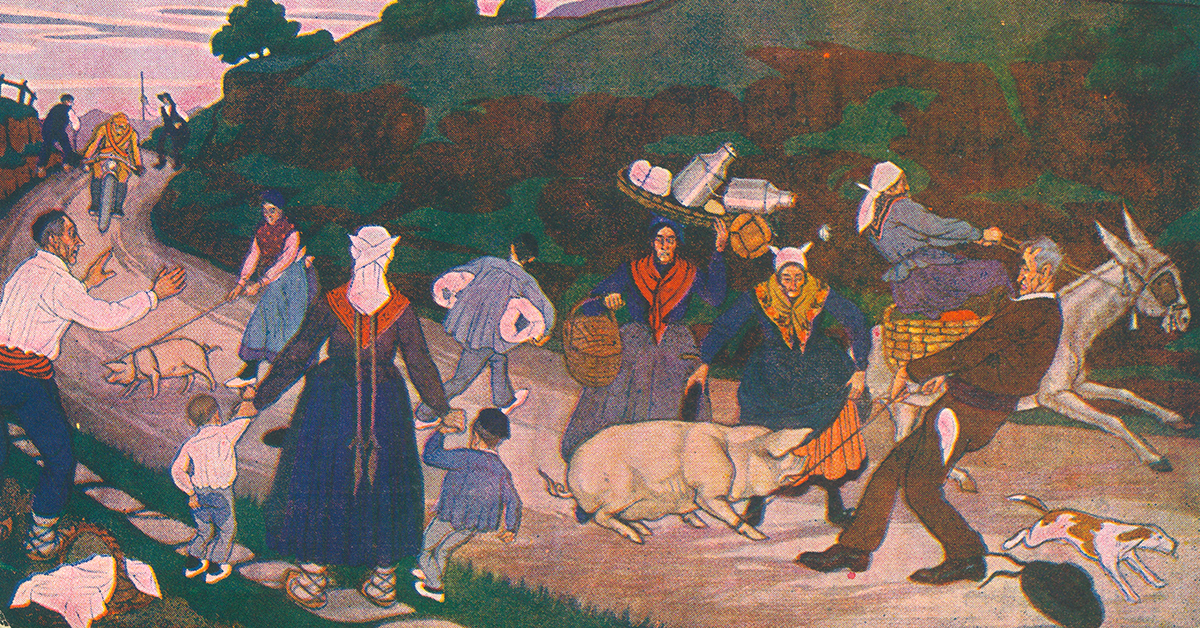 The Madrid-based daily El Universal, published between 1820 and 1823, the so-called Liberal Triennium in which repression on the press, general during the reign of Ferdinand VII, somewhat decreased, reported on 9 September 1820, citing the fleetingly blooming Gipuzkoan liberal press of the time (more particularly El Liberal Guipuzcoano: a philosophical, literary and commercial periodical), an event which had occurred (it was said) in Bayonne a few days earlier:

We read in El Liberal Guipuzcoano of 28 August last the following:

News from France tells us that a very unusual incident happened in the vicinity of Bayonne a few days ago. It seems that a thief managed to break into a pigsty where there was a herd of pigs without being seen at night; he chose the fattest among them, and after having strenuously tied a rope around its snout so it would not squeal, he restrained the animal in order to seize it, and then fled away.

He carried the pig for several leagues, and tired by its weight, he stopped as he got to a bridge, placed the load on the railing at the side, and paused to rest; fearing that the pig would escape, the thief tied himself with the remaining rope, and fell deeply asleep in this position.

The pig, who did not feel too comfortable in that awkward posture, began to move and make efforts to unleash itself; as a result of the force exerted by them both, the pig slowly leaped out of the railing, fell off the opposite side to where its new owner was sleeping, and ended up hanging in the air; but strangely enough, at the same time as the pig fell, the rope which the thief had wrapped around his body became wrapped around his neck due to the strength of the movements and contortions made by the animal, and thus he was hanged.

Think now of how surprising such a spectacle must have been to folks who passed by; they could not but admire the phenomenon of a thief hanged by a pig.

The account given by the press in Gipuzkoa and later Madrid as news which took place in the French Basque Country in the late summer of 1820 is most probably much more of a story or joke in disguise than real and verified news. Because, what thief in his right (and even not right) mind could steal the fattest pig, carry the uneasy burden for several leagues, get to a bridge, lay the load on the railing at the side, trusting the pig to behave politely and display impressive feats of balancing, as if it were an acrobat, tie himself to the animal with a rope, and lie down to sleep like a log, precisely there where passers-by were highly likely to discover them both?

The extravagant behaviour of the countryman (not of the pig, which at no time deviated from an impeccable logic) suggests that we are dealing with a typical tale of foolish farmers, one of the many which circulated and still circulate in countless oral Basque and non-Basque traditions: who knows how many mouths and papers would have spread them, and how many manipulations and reproductions would have been known, before landing in the 1820 press reaching us.

We are able to learn some more about the secretive nature of the foregoing report through the realization that, apart from a Basque-French short story of a stereotypically foolish farmer, we are indeed faced (even if the word witch would not appear explicitly back in 1820) with a tale of witches who turn into pigs and are fond of jumping off bridges to bathe at night in rivers, and throwing country folks who tried to steal them into the water: stories to fit that script have also populated the imaginary of the Basques for centuries.

A beautiful story coming from the lips of a woman from Garate Farmhouse, in Baliarrain, gathered by José Ariztimuño in 1921, and published in Eusko-Folklore. Materiales y Cuestionarios [Basque Folklore. Materials and Questionnaires], 3rd series, n. 20, under the guidance of by José Miguel de Barandiarán, alerts us:

There are times when witches would take the form of a pig. That is the case in the following story gathered in Baliarrain (Gipuzkoa):

A certain man would get up very early every day, around three o’clock in the morning, to go to the mountain. One night, [believing that] it was three o’clock, he got up before midnight and headed for the mountain.

As he was crossing the bridge over the stream, he saw some fat pigs diving in the water, from one side to the other, making a hell of a din. Rather disturbed, he nonetheless continued on his way, aiming to arrive at his destination on time.

“I shall grab one on my way back home” he planned.

He realized there and then that it was not midnight yet and returned soon to the stream with the intention to catch a hog.

He went down to the water and picked up a pig. And while he was making great efforts to lift it to his shoulder, the pigs came out of the river and all together threw the man in.

When he had at last managed to get out of there, he saw that the said pigs were in fact witches.

The fact that the peasant who was crossing a bridge, protagonist of the old tale of witchcraft gathered in Gipuzkoa in 1921, would be hurled into the river as he tried to steal a pig is irrefutable proof of kinship with the peasant hurled from a bridge into the river by the pig he was trying to thieve, from the narrative published just about a century earlier, in 1820.

Moral: you should not trust either pigs who are prone to dump prospective thieves into water, or witches who metamorphose into piglike swimmers at night, or stories which are presented as real news.

Notice: the great scholar Óscar Abenójar, expert in the subject, is currently preparing a comprehensive and enthralling monograph on old-time international sources and parallels of such intriguing Basque tales. And when published, we shall take the opportunity to better appreciate the amazing philosophy behind the mentioned stories about pigs who are given to diving into rivers.

José Manuel Pedrosa – Professor at the University of Alcalá