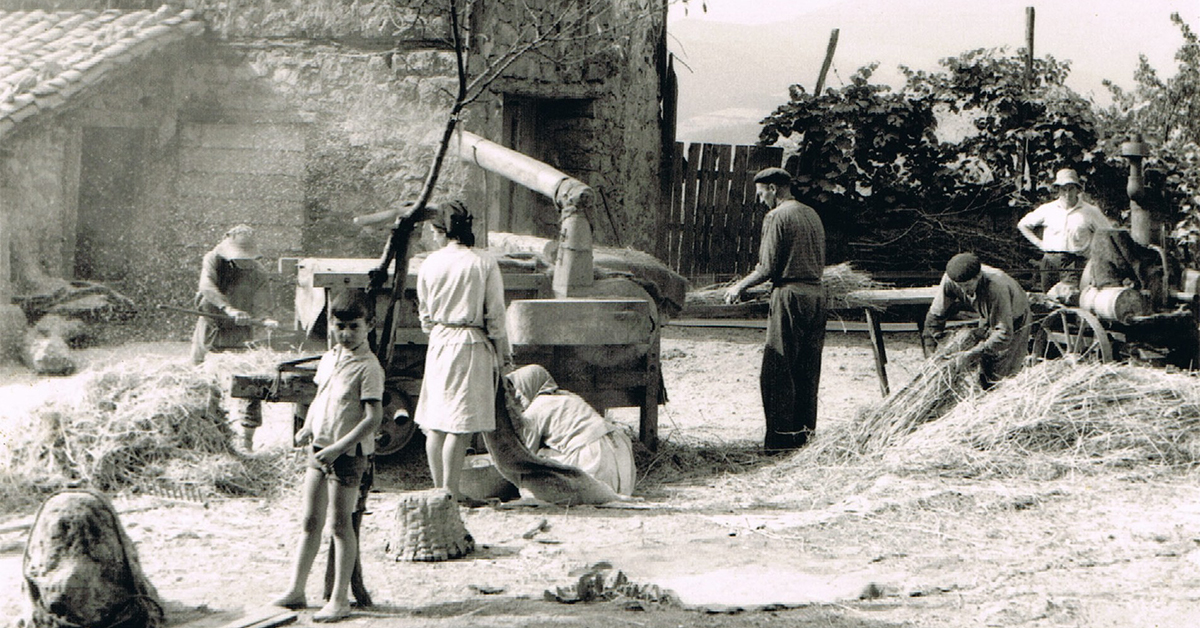 Wheat was once a crop of great relevance in the territory of Bizkaia, wheat bread being an essential component in the diet of common folks. Abandonment of wheat took place from the 1950s onwards, because of the hard work and efforts which its cultivation required, and coinciding with the greater possibilities of buying the end product in shops and markets.

Despite the substantial importance of this crop, the excessive humidity of our climate, highly detrimental to its production, posed huge challenges. As a matter of fact, the annual wheat harvest would by no means be sufficient to meet the needs of the population, and importing became a must.

Sown from seed round about November, it would not be until after the long winter and revivifying spring that grain-bearing ears of wheat fully developed. By July they were ready to harvest, a task which demanded abundant labour, so help from family and neighbours would be expected and much appreciated.

Stalks were hand harvested using a sickle, since cultivated fields would not be too large. Over the years, scythes began to be used, and even harvesters drawn by oxen. Having gathered the stalks into bundles and bounded them together, they were moved to the farmstead or its vicinity, often piled into stacks, and as soon as the ears of wheat were well dried, it would be threshing time.

Only in good weather and during the heat of the day would wheat be threshed. Various common methods to separate grain from straw included: hand beating the wheat heads against slightly inclined stone slabs, using an oxen-powered threshing board, or treading, which consisted in sheaves being trodden beneath the feet of a group of several mares. As for the threshing board, this old-fashioned agricultural implement consisted of two or three wooden planks, assembled to one another, with hard and cutting flint fragments covering its bottom, initially, and serrated metal segments, subsequently, which contributed to the separation of the grain, without damaging it, and the crumbling of the straw.

After the grain was detached, it was piled up and winnowed by hand in order to remove the chaff. Winnowing machines, generating a current of air, were successfully introduced, which facilitated the process. Over time, threshing machines were also developed, which greatly eased the arduous task of threshing. The evolution of harvesting, threshing and winnowing machinery would, however, be cut short with the disappearance of wheat cultivation.

Saint Christopher, patron saint of drivers and healer of the deaf