Nothing but simple rags with a lost function for some, unique rewards for impressive feats accomplished for others, and a symbol of identity for an important part of society. Be that as it might, the banner, the standard, the flag… are often insignia and fabrics loaded with devotion, fanaticism or honour, straddling boundaries —sports, religion, politics, patriotism, or folklore—, and even seeking to differentiate social status.

On more than one occasion we have been able to observe how in some European countries, as well as in territories close to Euskal Herria, in sumptuous or festive acts, flags are waved: whether defending a military origin or as a ritual with historic roots in the uprising of the people against the oppressive feudal power.

In spite of its gradual disappearance, different examples of this tradition are still preserved in our country: specifically, and to somehow identify and classify them, we could attend to four main variants of ‘flag dances’, with possibly very different origins. 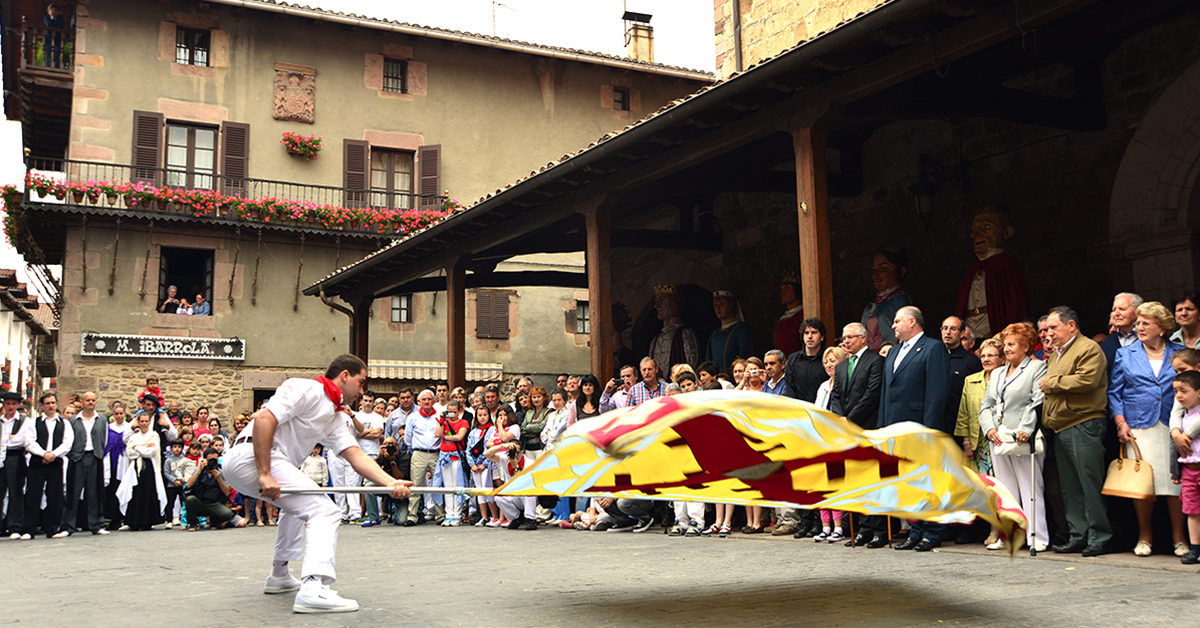 Before the authorities on the feast of St Peter. Doneztebe (Nafarroa), 2013. Photo credit: Emilio Xabier Dueñas.

Thus, in Bera, Lesaka and Doneztebe (Nafarroa), during the procession on the day of Corpus Christi, and patron saint festivities, the local flag is waved to the beat of steady-paced melodies (Zantzo monona, Bandera arbola…) interpreted by txistu players. The same happens in Laguardia (Araba) on the feast of St John, inside the church under the same saintly invocation, to the music of the dulzaina, locally known as gaita. And in Oion (Araba), Cachi (buffoonish character) turns over on the ground while the flag spins and spins above him, to the sound of the band. A most singular act, if there ever was one.

Second, we come across the most renowned of our flag-waving events (either the municipal flag or the group’s own flag or banner being twirled over the dancers’ heads), within the first routine of the cycle of dances so called Ezpata-dantza ‘Sword dance’ or Dantzari-dantza ‘Dance of dancers’ and traditionally danced in Durangaldea (Bizkaia): namely, the Agintariena ‘Salute to the authorities’, more generally named Ikurrin-dantza because of the notable presence of the ikurrina or Basque national flag. 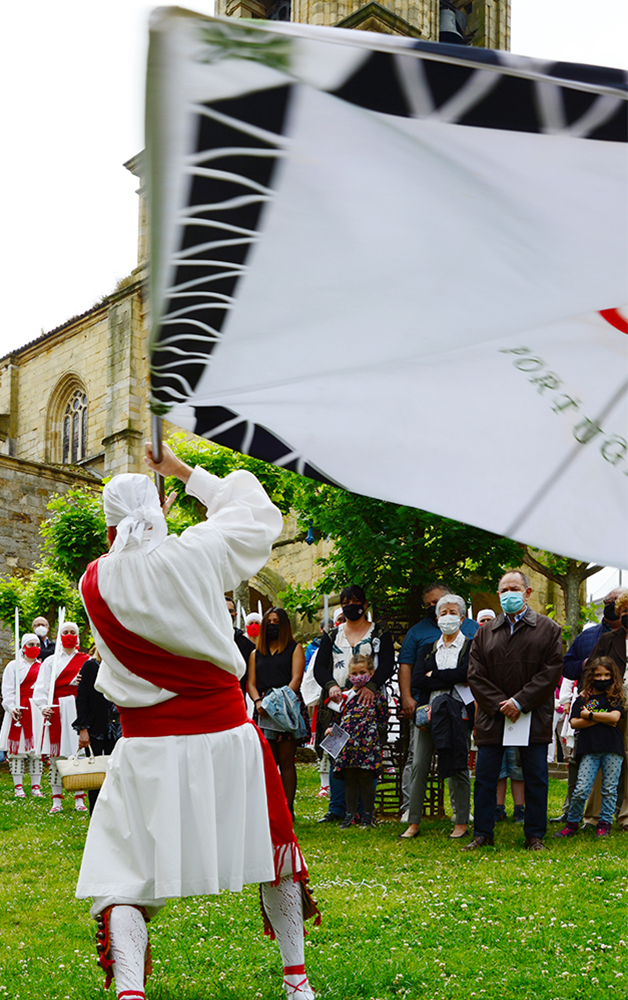 Third but not least, much as smaller objects are employed, we have the sharper movements of flag and standard bearers on the feast of Corpus Christi or Bestaberri of Lapurdi and Navarre, and the Maskaradak of Zuberoa, so-called banderariak and entsenariak, respectively.

And several creations have been added over the last thirty years or more to this colourful ‘army’ with ritual tinges, flag dancing having been incorporated to various Ezpata-dantzak ‘Sword-dances’ in an attempt to recall bygone days.

To trace the origin of flag-waving sequences turned into formal dances performed to the beat of generally ceremonial music might not take us on a long journey back in time. The use of flags and similar paraphernalia with a civil-religious purpose would appear to be what remains in society, as the evidence shows. Nurtured by folklorism, such converted aesthetics are enjoying a popular revival, but is it folklorism what substantiates the contemporaneity of their raison d’être?