The feast of St John in Laguardia (Álava) 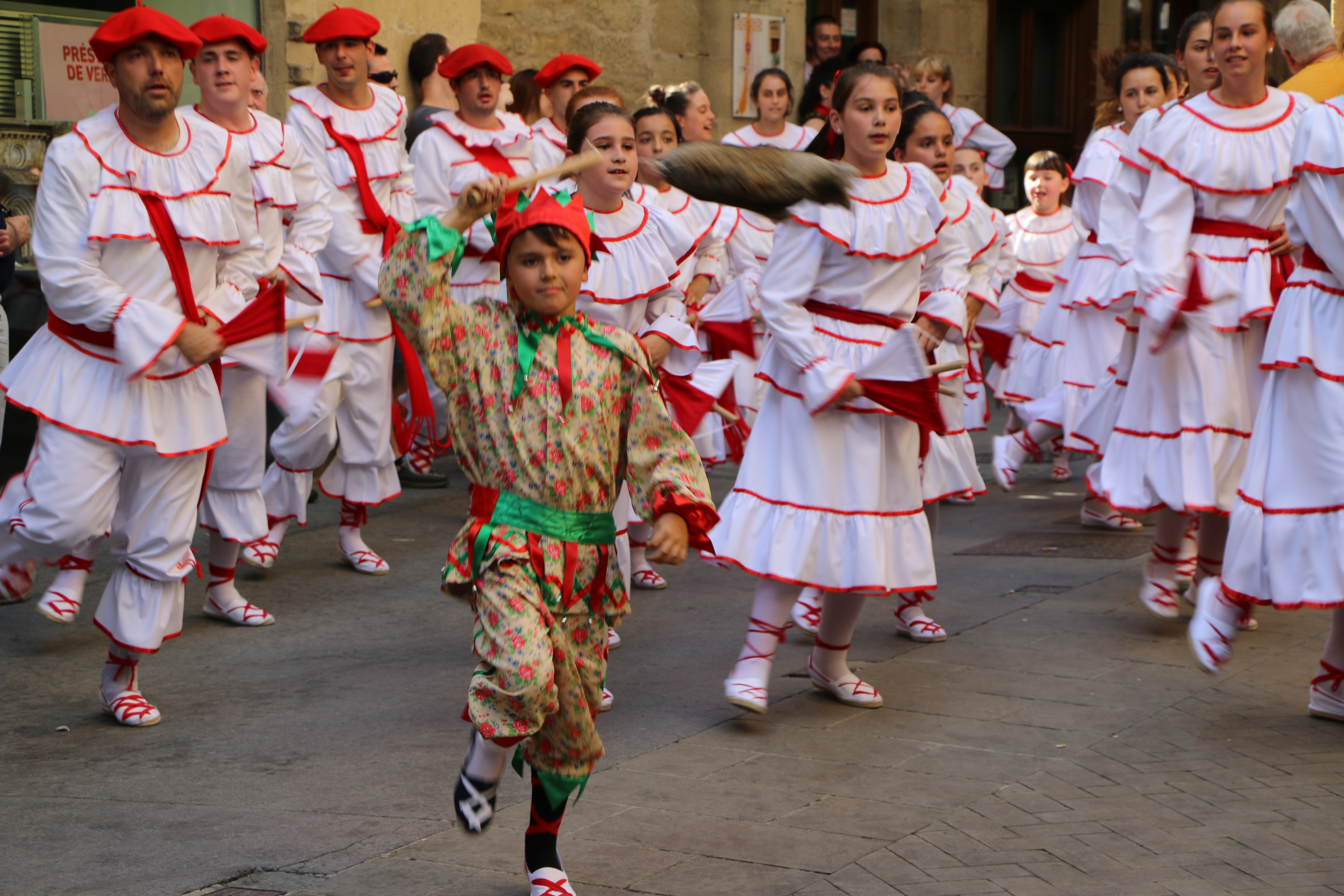 Cachimorro and his troop of dancers, 2016. José Ángel Chasco.

Laguardia is an ancient fortress city erected on a hill facing Toloño Mountains. An extremely rich cultural and winemaking tradition turns it into the major attractive tourist destination in Álava after Vitoria-Gasteiz. Churches, mighty walls, narrow streets, heraldic mansions, dolmens, the nearby Celtiberian settlement of La Hoya, wineries and the lively St John’s festival are part of the city’s identity.

Every 24 June the facade of city hall is emblazoned with abundant festive ornaments hanging from windows and balconies, including six ivy arches, laurel branches and colourful fabrics. Outstanding among them is the flag of Laguardia with the city’s coat of arms in the centre.

Shortly before six in the afternoon, both on the eve and on the saint’s day, Cachimorro and a group of dancers accompanied by the mayor and the trustee dance their way through the streets to city hall. As leader of the troop, Cachimorro dances and shoos away fellow citizens who obstruct the march or interfere with him using a skin of rabbit.

Cachimorro wears a stunning, eye-catching costume. Dressed in a harlequin or medieval buffoon suit, he sports a cone-shaped hat full of bells, producing agreeable sounds as he moves and jumps around.

Arranged in two rows of eight, dancers and Cachimorro dance in the street while presenting local authorities and attendees with bunches of flowers. Next the whole party, counting Cachimorro, dancers, pipers, authorities, guests, the municipal band and general public, head along Main Street to the Chapel of Our Lady of the Pillar at St John the Baptist Parish Church, where the flag is flown. 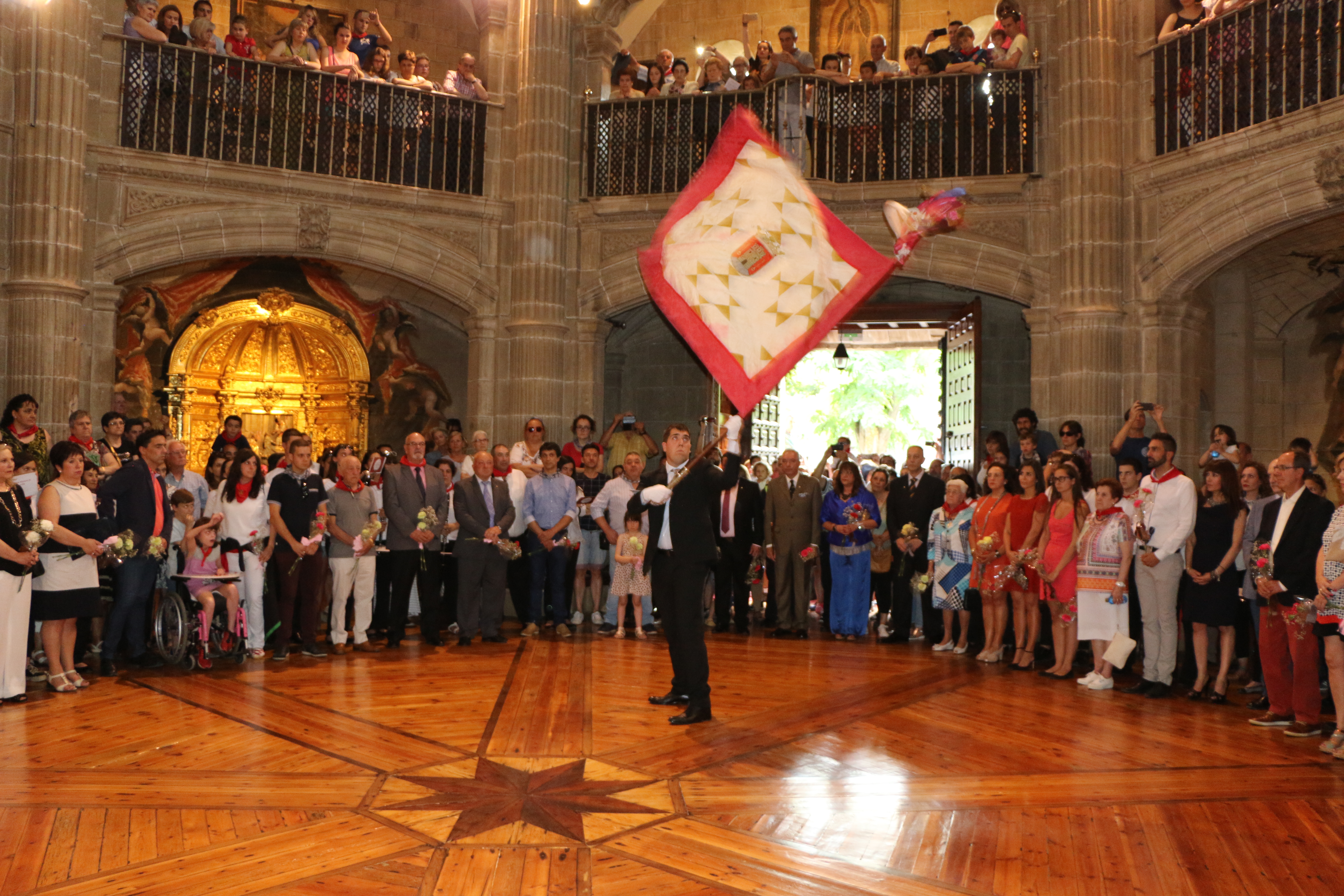 The trustee, in suit and white gloves, unfurls the flag on the floor before the image of Our Lady of the Pillar. He kneels and blesses himself, joins hands and bows his head in prayer. Taking a firm grasp of the flagstaff, he raises the flag bearing the emblem of the city in the air and waves it in time with the music allowing it to fly to one side and the other. His vigorous waving makes the fabric roll and unroll onto the staff, first to the right, then to the left. As the beat slows down, the flag is waved slower and lower until it is finally left lying on the floor.

The municipal flag is flown a second time before the image of Saint John the Baptist, the city’s patron saint, at the main altar. The ceremony ends with the flag placed on the floor and prayers said. This time-honoured tradition of military origin was meant to express gratitude to the Virgin and the saint for protecting the city from enemy attacks and sieges.

Besides the March of St John and the flying of the flag, other dances too are part and parcel of patron saint celebrations in Laguardia. Formerly performed on the feast of St John the Baptist Beheaded (29 August), remarkable dances such as the Troqueao or Stick Dance of St John the Baptist Beheaded, the Dance of the Arches, the Midsummer Pole Dance and the Jota are now scheduled for the Saturday prior to St John’s Day.