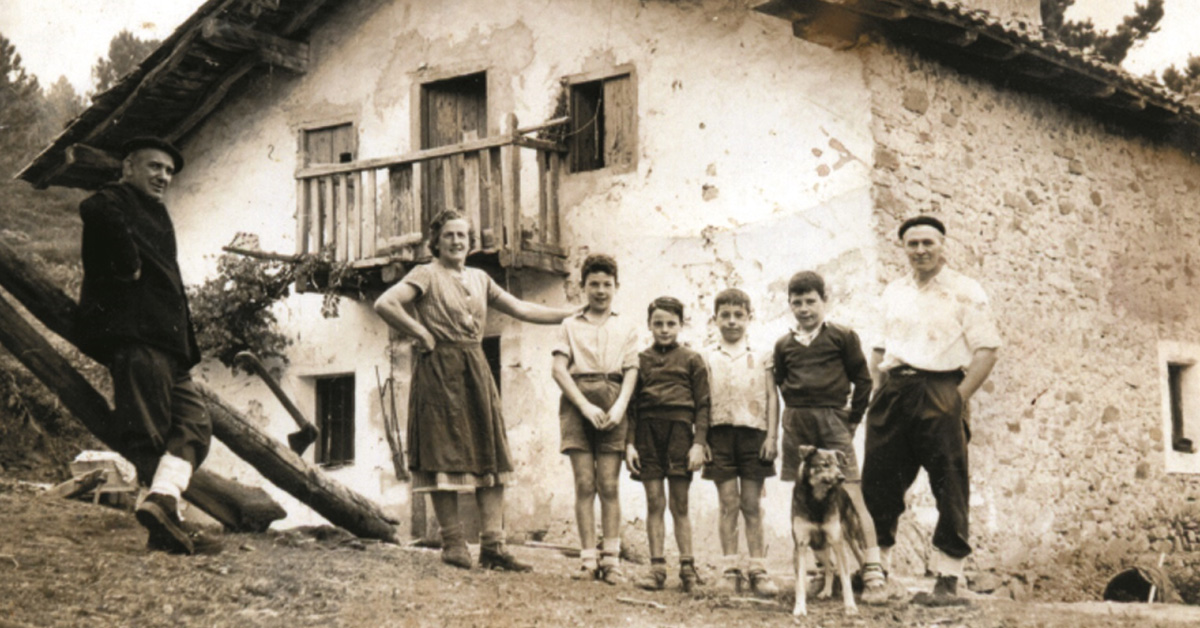 In Gernikaldea, women and men alike traditionally wore dark simple clothing to work in the fields. When it came to working in the barn and stalls, they would wear any old clothing so it did not matter if it became stained with manure or when milking.

When ploughing or working in the market garden, men wore denim and often patched (erremenduak) trousers, a denim or gingham shirt, waist belt (garrikoa) to help with lower back pain, an old jumper and a beret (txapela) on their head.

Women wore a skirt (gona), blouse and a jacket over it, apron (amantala) and headscarf. If they had to pop out to the vegetable garden in bad weather, they would put the galoshes that were usually kept in the porch over their canvas shoes.

If it was raining heavily and they had to leave the house, they would wear a jute sack that had contained the sugar (azukre-zakua) they had bought or burlap sacking, which they would use to cover their head and back.

They used abarkas, the traditional Basque shoe, as footwear, initially made at home out of leather from the livestock. The bovine hide would be hung head downwards (ulez-behera) in the shed at a certain height from the floor to tan it. Lime was placed under it on the floor so that vermin (harrak) did not eat it. The hide was then placed on a piece of wood that was the sole and holes were made in the leather using an awl (abarka-untzea or abarka-ziria) for the laces (hede meheak). One person interviewed said that they had a poor grip. When it was raining, stones would get stuck and the farmworker could have to hold on to the ox’s horn to avoid falling over. They were replaced by rubber footwear bought from a store.

Feet were protected from the elements using spats (mantak) which were fitted diagonally and turned round when they got wet. Abarkas with gaiters were then introduced (abarka-txapinak), with the latter made at the farmstead using the wool.

Overalls are now mainly used, but not so much by women, along with old clothes. In summer, straw hats and caps are worn as protection from the sun.

On Sundays, high days and holidays, people would put on their best clothes, known as their “Sunday best”, which was the same as the garments worn by the people in the local town.